The amazing Washington Dead Cats return from the deads for this brand new devil deluxe album...

For those with an eye for the finer details, we salute you...

It’s been a rather long time since we started out this project with Mat Firehair a.k.a. The Voodoo Caruso. In stead of the traditional rehearsal/go to the studio/record/mix method, we preferred, as we had with the Juju Messengers, to record some basic tracks/think/think again/complete the recordings/pause method.

During a first weekend at Ouistiti we recorded seven basic tracks (drums + bass + guitar) completed some times later by the horn section and even later by the lead vocal. Months passed and we completed another set of seven songs (why this number, I wonder...) and ended up with a (very) rough mix of the lot. Good news, the Ouistiti team has since the Juju Messengers album had the main control room revamped and the troublesome Westec console traded-in for a safer Sony DMX R100 / Pro-Tools combo. 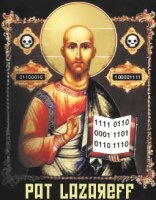 Then came the glorious time of mixing and we landed at Davout’s studio C when it still was equipped with its small SSL 4032 - there is a Neve VR by now - surrounded by the amazing vintage gear selected by my one time trainee (that was some time ago) Philippe Weiss. There is too much to mention it all, but the eight-channel old Neve desk and the impressive collection of various models of Urei compressors greatly improved the various tracks. Moreover, the studio has both 480 and 224 Lexicon reverbs plus an amazing AKG digital reverb.

A final note about the mastering performed by Jean-Pierre Bouquet at l’Autre Studio and here is how the meowws are back into your ears to haunt your wildest party-nights. Serve chilled.

Ah... and here on the right is how I appear on the cover, thanks to the multi-talented Fred Beltran. How did he know I always dreamed to be an icon ;-))